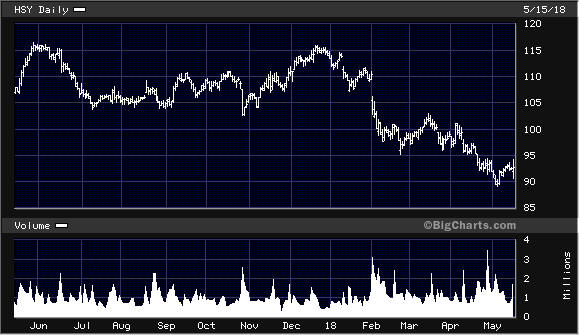 Consumer staples stocks have lagged the market by a wide margin over the past year. Hershey’s shares have fallen along with the sector. Margins are getting compressed so rapidly across the sector along as commodity inflation increases. Hershey’s stock price has dropped by 20 percent as the sector has been out of favor and Hershey’s adjusted gross margin narrowed significantly 44.9%, reflecting packaging and freight cost inflation. 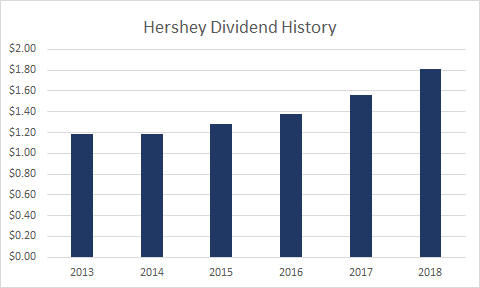 Hershey posted a profit of $1.41 per share for Q1, 1 cent above analysts’ average estimate, according to Thomson Reuters I/B/E/S. Revenue rose 4.9 percent to $1.97 billion, beating the average analyst estimate of $1.94 billion.  The firm is the dominant force in the U.S. chocolate market with a 45 percent market share. Hershey plans to extract $150 million-$175 million in costs to use for brand spending.  The firm’s top five brands generated more than $5 billion in annual revenue. These include Hershey, Reese, Kit Kat, Kisses, and Ice Breakers. The firm’s brand is ranked number two.

The Board of Directors of The Hershey Company announced quarterly dividends of $0.656 on the Common Stock. The dividends were declared on May 2, 2018 and are payable June 15, 2018 to stockholders of record May 25, 2018. It is the 354th consecutive regular dividend on the Common Stock. The stock is a premier firm that offers a solid 2.8 percent yield and trades at only 2.6 times sales, a seven year low. The stock has been added to the Top 100 list as the stock price has declined by over 20 percent in the past six months, now offering compelling value for a long-term investor.

View all posts by DividendMGR

Learn more about dividend investing with The Snowball Effect

The trading of securities may not be suitable for all potential users of Thedividendmanager. You should be aware of the risks inherent in the stock market. Past performance does not guarantee or imply future success. You cannot assume that profits or gains will be realized or that any recommendation made by thedividendmanager.com will be profitable. The purchase of securities discussed by thedividendmanager.com may result in the loss of some or all of any investment made. We recommend that you consult a stockbroker or financial advisor before buying or selling securities, or making any investment decisions. You assume the entire cost and risk of any investing and/or trading you choose to undertake.

To the extent any of the content published on the site may be deemed to be investment advice, such information is impersonal and not tailored to the investment needs of any specific person.

The materials on the site are not an offer to sell or a solicitation of an offer to buy any security, nor shall any security be offered or sold to any person, in any jurisdiction in which such offer would be unlawful under the securities laws of such jurisdiction.